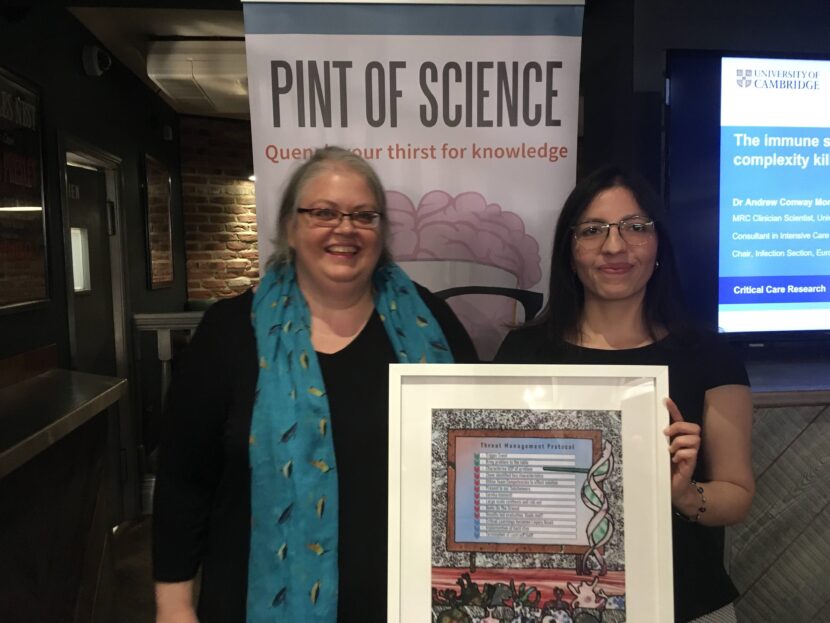 I really missed the Pint of Science festival and the associated Creative Reactions project during covid. The idea is that researchers on the frontiers of modern science give talks to the public, in a pub, about their research. And the art bit is that they are paired with an artist who has to come up with their ‘creative reaction’ to the science. I decided initially to take part because my husband and daughter are scientists, I hated science at school, but I want to be able to hold my own in a sciency conversation. But it has become much more to that for me. I find it an almost excrutiating challenge every year. I always want to get to the crux of the matter and communicate that with my art. To look at some of my previous pieces, go to my gallery, and click the SciArt selection box.

This year I was paired

Andrea (Manrique-Rincon, Wellcome Sanger Institute) gave me a taste, over a coffee, of just how complex the body’s immune response actually is. I was surprised to learn how many cells had such specific jobs, and how some cells could only function when other cells had ‘done their bit’. I imagined what this would be like if a human organization had to undertake such a task. I thought of the seminars, the action plans, and the management meetings. I also imagined the management jargon the HR or Senior Team would use to direct their troops. It would be the logistical feat of the century, much like Dunkirk, or London 2012. But our bodies just get on and do it. Most of the time.

To create this collage, I used photos and microscopy images of parts of

the human body. The stage, for example, is human tendons, and the backs of the chairs are microscopy of human cardiac muscles.
The meeting attendees are made from microscopy images of the immune response cells they represent. The DNA giving the talk is cut from a copy of the first actual ‘photograph’ taken of DNA [Photo 51, Rosalind Franklin Lab, 1952]

Tweets by @naomidaviesart
We use cookies to ensure that we give you the best experience on our website. If you continue to use this site we will assume that you are happy with it.Ok